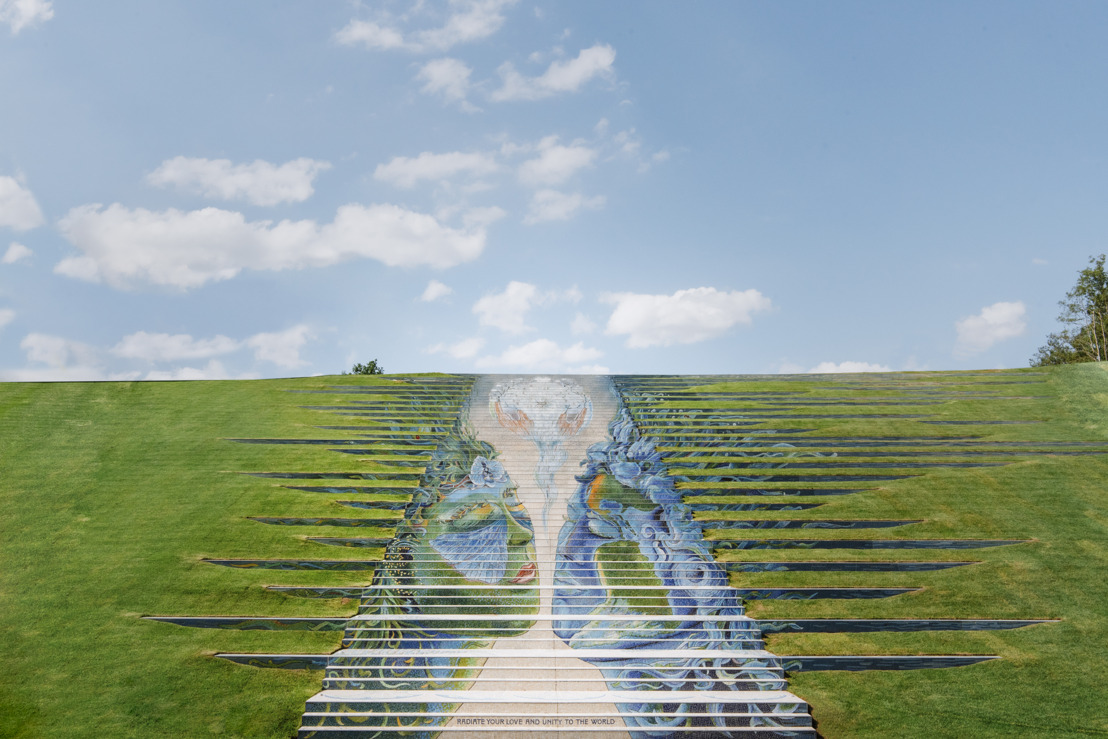 Friday, 10 June 2022 - Tomorrowland is unveiling ‘The Stairway To Unity’, a magnificent 60-meter-long handmade mosaic stairway located on the legendary Mainstage amphitheatre at the beautiful recreation area De Schorre in Boom (Belgium), which is home to the festival grounds of one of the most iconic music festivals in the world. The stairway represents 700 square meters of mosaic in its entirety and counts more than 5 million hand-cut pieces of mosaic, which have all been traditionally baked and cut into unique mosaic tiles in a small village in Italy. One by one, these tiles were hand laid to form ‘The Stairway To Unity’, symbolizing Tomorrowland’s most important value, as the festival unites people from more than 200 countries across the globe each summer in Belgium.

Specially envisioned and designed by the creative team behind Tomorrowland, ‘The Stairway To Unity’ is the result of a close international collaboration with Parisian mosaic expert Jean-Christophe Duperron, Cuban artist Michel Herrera Cuello and Italian company Mosaici Moruzzi – the most skilled mosaic artists all joining forces to craft a masterpiece of truly epic proportions.

People are guided up the 60-meter-long mosaic stairway past the mythical beauty of Mother Earth and Mother Nature looking at each other; between the two faces, a winding path forms upwards. The descent is a giant dragonfly, in which many small details can be discovered. ‘The Stairway To Unity’ is both a starting point and an ending point, calling on all visitors during the festival, as well as throughout the year, to spread the positivity and connection they experience at this magical place and green oasis.

French mosaicist Jean-Christophe Duperron: “There are approximately 5 million pieces in this mosaic. It’s not as easy as taking a piece and placing it just like that. We first take a piece which we cut and adjust until we get the perfect little piece to fit in the mosaic. One person works on one piece, so 5 million pieces means endless hours of work. Let’s say this project represents approximately 15.000 hours of work.”

Cuban artist Michel Herrera Cuello: This project isn’t just a decorative project. The most important is not the beauty of the stairway but the message that it delivers: the path to save our planet begins with tolerance and a respectful dialogue between each other.

Italian company Mosaici Moruzzi: “Forming a team of 20 mosaicists to perform this 700 square meters mosaic in 6 months was truly an extraordinary experience.”

The Stairway To Unity

The mosaic staircase is Tomorrowland’s third permanent public art installation in De Schorre, after introducing the ‘One World Bridge’ by Arne Quinze in 2014 and the ‘Magical Troll Forest’ by Thomas Dambo in 2019, creating pleasure and value for everyone to enjoy the unique and beautiful scenery of De Schorre all year long.

About Tomorrowland
​Tomorrowland is one of the most popular and iconic music festivals in the world held in Boom, Belgium, organized and owned by the original founders, the brothers Beers. Tomorrowland was first held in 2005 and has since become one of the world’s most notable global music festivals. It takes place every year in summer and now stretches over 3 weekends in 2022, welcoming 600,000 People of Tomorrow from over 200 countries, and selling out in minutes year after year.

Tomorrowland is located in a beautiful natural place, recreation area De Schorre, in the town of Boom, Belgium. It is a true fairy tale world situated in beautiful natural surroundings, with a strong eye for detail such as enchanting décor, fascinating acts and peripheral animations, amazing, tasty and healthy food and drinks, spectacular fireworks - an unforgettable and incomparable show. Every year, the festival features a special theme that inspires the famed MainStage design and stage production.