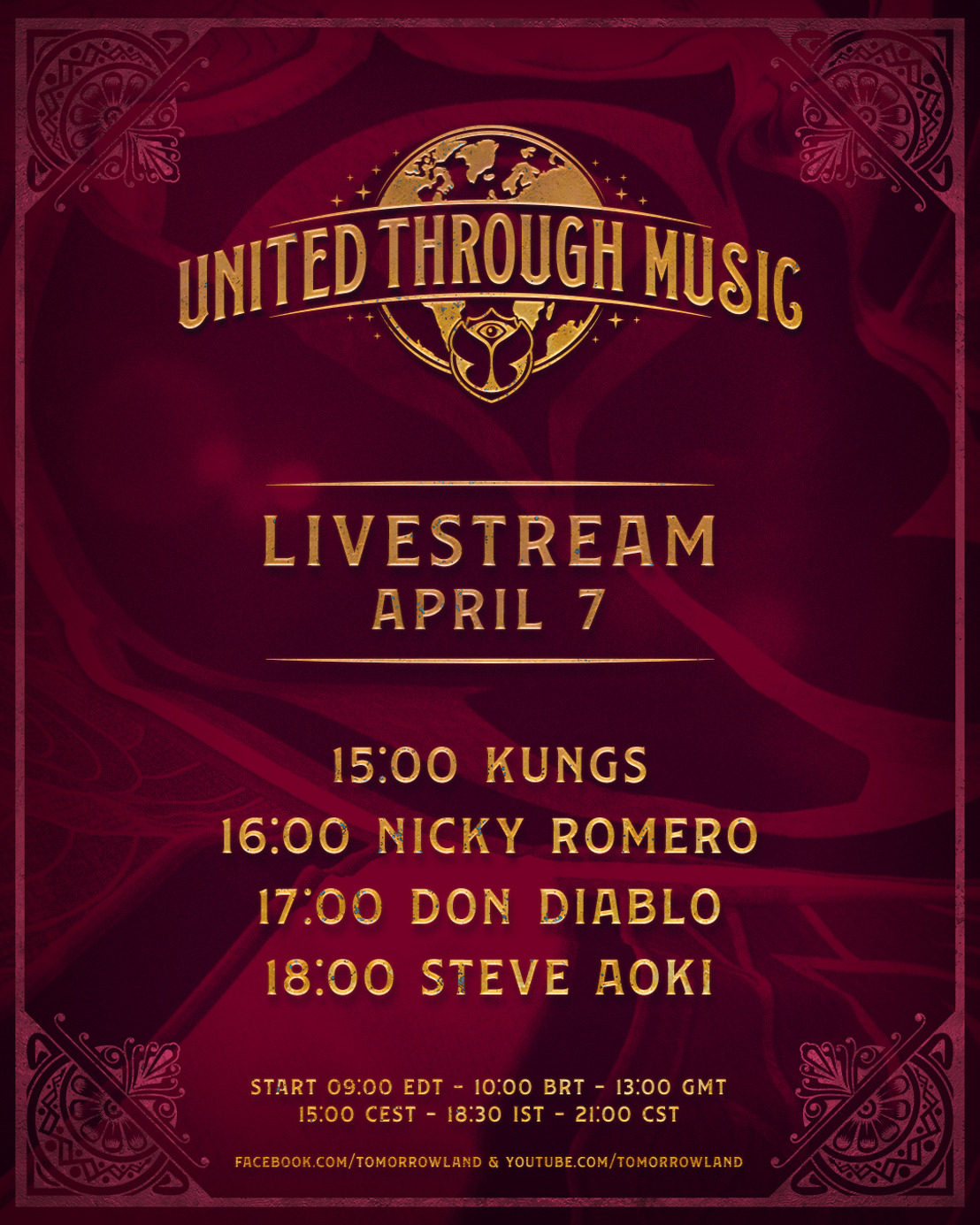 Monday, 6 April 2020 - Last Tuesday more than 2.9 million People of Tomorrow from across the globe tuned in to experience Tomorrowland’s first ever United Through Music live broadcast, receiving views from 178 different countries. Hosted by Tomorrowland, four different artists including Dimitri Vegas, Afrojack, Lost Frequencies and Vintage Culture brightened up the world with their magical sounds and delivered one of a kind performances, allowing the People of Tomorrow to interact and unite as one from the comfort of their own homes across Facebook, Instagram, YouTube, Tomorrowland.com/unite (via video conferencing) and One World Radio. Relive the first edition of United Through Music right here.

Following the success of its first edition, Tomorrowland wishes to continue to give fans a wonderful experience at home and now announces a second edition of ‘Tomorrowland Presents: United Through Music’ on Tuesday April 7 from 15:00 CEST – another unique live broadcast featuring exclusive performances by Steve Aoki, Nicky Romero, Don Diablo and Kungs. One World Radio’s host Adam K will present the show from his home studio in London and interact with the different artists and the People of Tomorrow at home. During the sets, viewers and listeners can ask questions – the best ones will make it to the broadcast – and fans can also use video conferencing to show how they are watching, and potentially be featured on the live stream around the world.

Over the course of four hours, the worldwide success of United Through Music’s first edition reached over 2.9 million viewers and listeners. The live broadcast brought the magic and unity of Tomorrowland into everyone’s living rooms, making it a truly magical experience with people of all ages and places uniting, connecting and spreading love through the power of music. Reminding the People of Tomorrow to stay home, wash their hands and practice social distancing, One World Radio’s host Adam K asked each artist a couple of questions during their sets to learn how they pass their time in self-isolation and read off comments and questions shared by people around the world, including more than 42.000 people from 145 different countries that locked in to join the broadcast via video conferencing.

Dimitri Vegas: “This was a truly unique experience for me with millions of people around the world that could enjoy my music. United Through Music is a wonderful initiative, because it is very important to continue to unite everyone during these challenging times.”

Lost Frequencies: "This was so amazing. Together with Tomorrowland, I’ve been able to play my music for the entire world. It was incredible to see so many people participating and to actually get to see them being featured on the live stream around the world.”

Fans attending the second edition of United Through Music will be able to witness uniquely curated sets from another four different world class artists, including crowd favorite and founder of Dim Mak Records Steve Aoki (live from Las Vegas), Dutch DJ and producer Nicky Romero (live from Veenendaal), one of the world’s favorite Dutch future house pioneers Don Diablo (live from Amsterdam) and French young gun Kungs (live from Paris). Each artist will be spinning great music and fueling the party straight from their own homes into the homes of people around the world during this unique live show, interacting and supporting each other as one large global community.

Tune in to the second edition of ‘Tomorrowland Presents: United Through Music’ and be part of the show on Tuesday April 7 from 15:00 CEST on Facebook, YouTube, Tomorrowland.com/unite (via video conferencing) and One World Radio.